Holly Willoughby and Phillip Schofield returned to the small screen on Dancing on Ice this week, as millions of Britons tuned in to watch the presenters lead the show again. Holly, 39, is well-known for her elegant yet pared-back looks on ITV’s This Morning, which is particularly popular with daytime viewers across the nation. She regularly posts snaps to her Instagram account, providing insight into her outfit of the day. 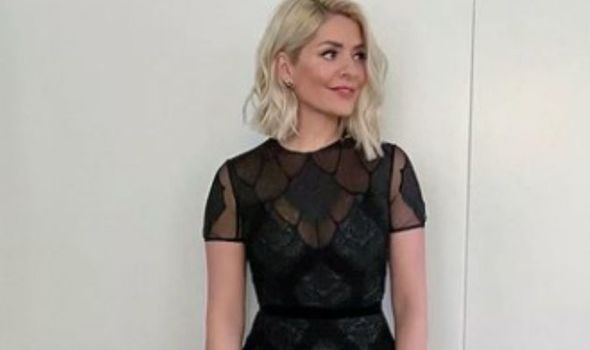 However, Dancing on Ice provides the opportunity to swap back more simple outfits for a more glamorous style.

Holly took the opportunity to share her stylish look before appearing alongside her co-presenter tonight.

The bubbly host once again took to Instagram to provide a sneak peek into her outfit, which delighted fans.

“It’s extra glam-tastic as we go to the musicals tonight, and man we have missed them!”

The ITV host wowed in a stunning floor-length black gown with short sleeves and a beautiful damask print.

The gorgeous dress was designed by Costarellos, a fashion house launched in 1998, which also offers a bridal collection.

It was accompanied by jewellery from Stephen Webster Jewellery, a high-end British fine jewellery brand known for its “traditional craftsmanship”.

Holly’s shoes, which cannot be seen in the picture, are by Sophia Webster, a designer she has worn in the past.

Holly also provided fans with a zoomed-in photo to show her glamorous, yet simple, make-up look, created by Patsy O’Neill.

She looked breathtaking with simple black winged eyeliner and a pink lip which allowed the statement dress to shine.

This was highlighted further by Holly’s signature “lob” hairstyle, which tonight was coiffed into soft, delicate waves by hair stylist Ciler Peksah. 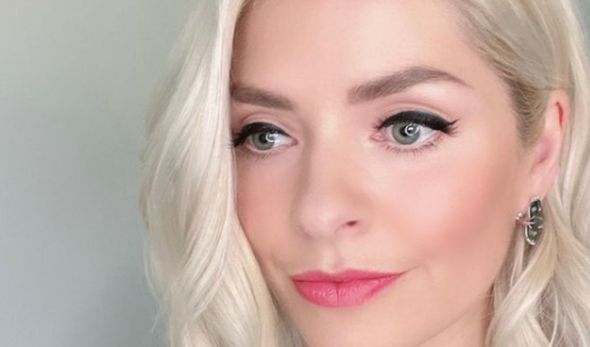 Holly’s fans on Instagram gushed about her elegant and glam look for tonight’s show on ITV.

One wrote: “Wow, you look so beautiful Holly, can’t wait to see you on the ice!”

A second fan said: “You look absolutely amazing!! Love all the selfies you give us.”

A third commented: “Oh beautiful! It would be wonderful to have a reason to dress up! Dreaming!”

While a fourth said: “This is different and I love it! You look so stunning Holly. Can’t wait until the show!”

Tonight, Phillip Schofield appeared in a colourful coat, famous from his time playing Joseph in the West End production of Joseph and the Amazing Technicolour Dreamcoat.

Last week, Holly stunned in a flawless white bodycon gown from Halfpenny London which she paired with dainty pearl jewellery by Yoko London.

She finished the look with shoes by accessory designer, Sophia Webster, a designer she is also wearing tonight.

The competition on Dancing on Ice is hotting up, as celebrities battle it out each week to be saved from elimination.

Last week, it was unfortunately musician and TV personality, Myleene Klass who was the first celebrity to be sent home from the show.

Dancing on Ice airs Sundays at 6pm on ITV.