Bryson DeChambeau has been getting a lot of attention since the return of professional golf, and for good reason. For one, he’s jacked as hell right now, carrying an extra 20 pounds of muscle. He’s also hitting longer drives than ever, including 367 yards at the recent Charles Schwab Challenge, prompting a lot of talk about the work he put in while under quarantine.

But this transformation has been a lot longer in the making, according to the five-time PGA Tour winner.

“Eight months ago I said, you know what, I want to try and get stronger, because I know there’s an advantage to be gained,” says DeChambeau. “If I could be like Happy Gilmore or Kyle Berkshire, hitting over 400 yards and hitting it straight? That is a massive, massive advantage. So I set out to do that, and I’ve been healthier and stronger ever since.”

DeChambeau knew that building strength would help him in terms of speed and length in his drive, but that wasn’t his sole motivation. The last eight months’ training have also been in pursuit of a longer-term lifestyle change.

“I’m able to get up out of bed without feeling stiff in the morning,” he says. “I used to wake up every single morning feeling terrible because my abs weren’t working properly, and my back would hurt because it was overcompensating for them. So once I started training the body proportionally, it really showed me a new life.” 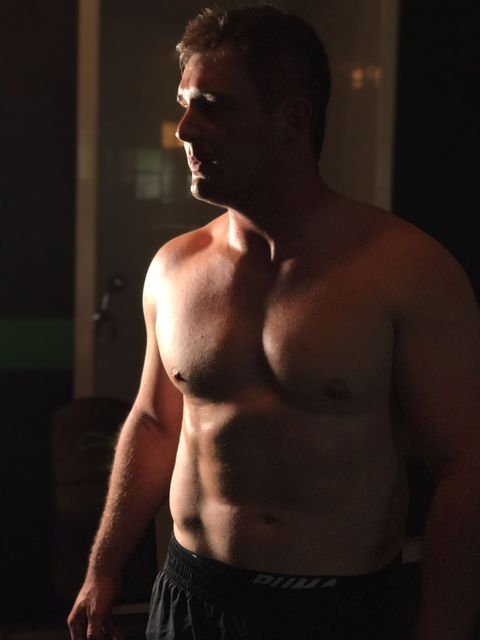 DeChambeau has been working closely with Greg Roskopf at Muscle Activation Techniques (MAT) for the last two years on developing strength through mobility. The last eight months have seen him step up the intensity on that training, committing more time to building symmetrical strength in his core through exercises that focused on trunk rotation, trunk flexion, leg flexion, back extension, and side bends.

Going live today for a workout stream powered by @drinkorgain. Join us, see the techniques for I use for building mass while maintaining flexibility and ask questions. Going live at 1pm EST / noon CST. Twitch.tv/thebadone23

He has taken Roskopf’s motto—”you’re only as strong as your weakest link”—on board, isolating and training every muscle in his body. “Right down to the fingers,” he laughs. That also means working out every single evening, without fail. He explains that he doesn’t take rest days, as a good night’s sleep is all the recovery he needs.

“If I trained in the mornings, I wouldn’t be able to go out and play golf that day,” he says. “I play golf, and then I see working out in the evening as my way of taking care of any aches or pains that need fixing.”

But while many athletes would accompany such an intense training schedule with an equally rigorous nutrition regime, DeChambeau keeps things simple. “I’ve tried the keto diet and all these things, but what I’ve found is that as long as I’m keeping a 2:1 ratio of carbs to protein, that works for me,” he says. “Obviously that’s not going to work if you want to lean down. But walking 8 miles every day, I haven’t gained any fat.”

“People think I’ve got all these crazy theories, but when you really break it down to the root principles of what I’m trying to do, it’s a lot of common sense,” he adds.

The results certainly speak for themselves. Right now, DeChambeau has an average driving distance of 323.8 yards, and he is currently on track to break the PGA Tour single-season record for average distance (currently held by Hank Kuehne). And he intends to keep going.

“I don’t know the endgame for me,” he says. “I’m going to keep working out every day and keep getting stronger, and keep speed training as long as I can tolerate it. As long as everything is growing proportionally, I really don’t know how fast I can go. So I’m going to keep pushing the boundaries.”