What word comes to mind when you think of adidas’ A-ZX packs? If you’re Till Jagla, adidas’s Global Head of Energy Marketing, it’s “diverse.” If you’ve been in the game long enough to recall the Manchester acid house or Berlin techno scenes of the late ’80s, it might be “paradigmatic.” If you’re an avid adidas collector, it’s probably “influential” or “iconic.”

The history of A-ZX is layered with both technological innovation and cultural cachet. When adidas ZX originally launched as a line of high-performance running sneakers in 1984, it offered the first silhouettes with an arch-supporting Torsion bar that enabled weight-saving split midsole technology.Designed by Jacques Chassaing and Markus Thaler — the former of whom rose to become adidas’s Design Concepts Director, while the latter once worked alongside brand founder Adi Dassler himself — Torsion’s stability-maximizing, weight-cutting build kicked off a new era of running footwear.

Fast forward to the late ’80s and adidas released the ZX 8000. The high performance shoe became a status symbol in 1989 when the Berlin Wall fell and East Berliners laid their eyes on it for the first time. “Back then, of course, such a high price point was luxury,” says Jagla of the shoe’s250 Deutch Marks (roughly $250 USD in modern currency) price point. “People, especially in Berlin, wanted to get that shoe as a pinnacle piece, a statement piece. That’s how things slowly started before [ZX footwear] went to subcultures.” 1 of 2 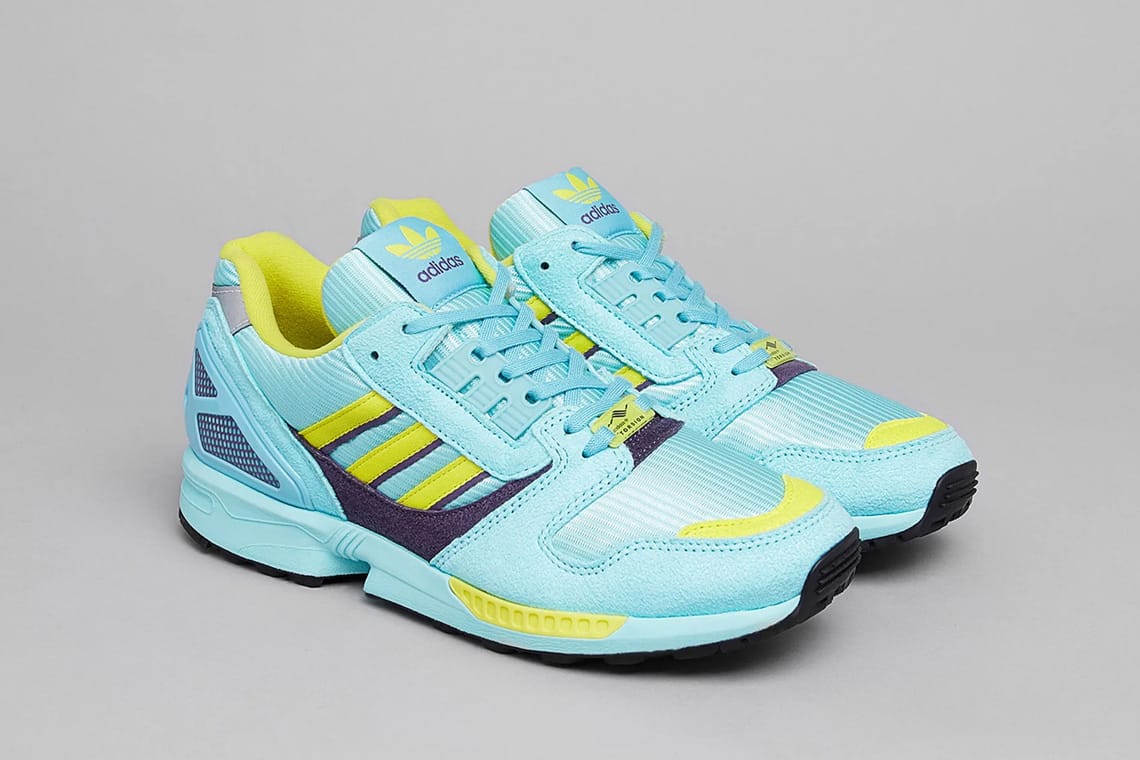 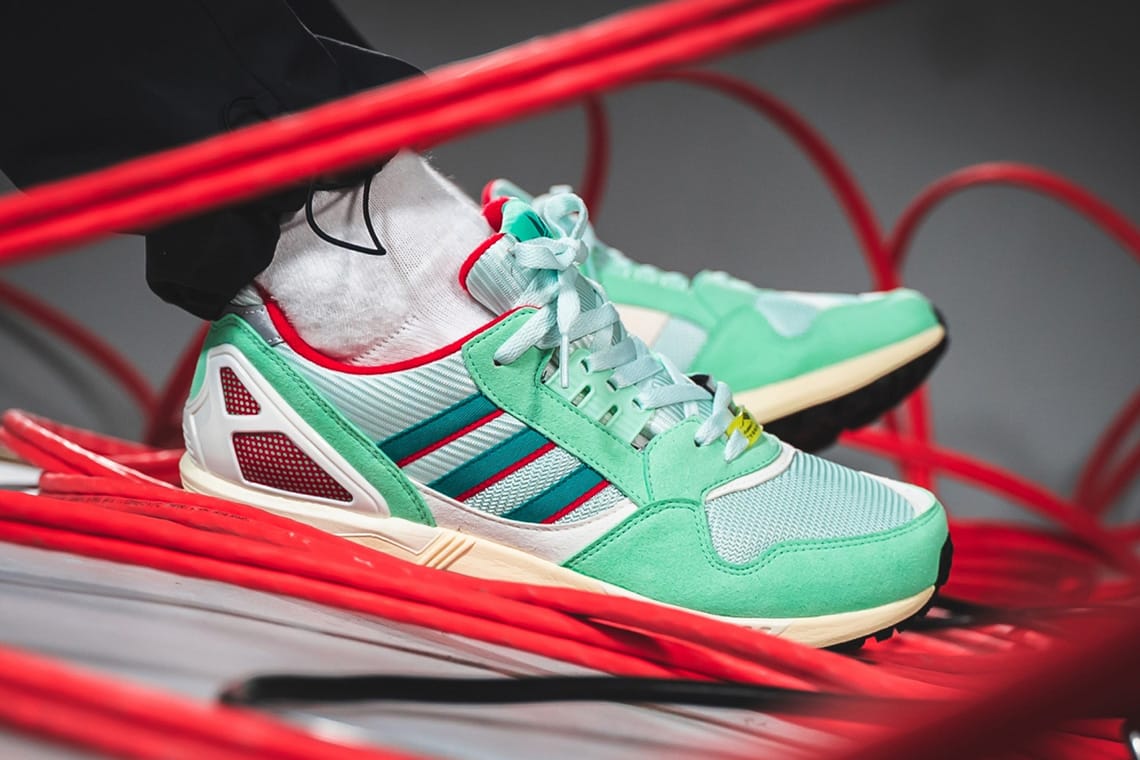 And go to subcultures the ZX line did, both in Berlin and other hot spots around Europe. During the U.K.’s second “Summer of Love” in 1988 and 1989, the ZX 8000 and ZX 9000 quickly became a favorite of the acid house rave scene in Manchester. The reasons for its adoption in the party scene were twofold: the Torsion bar ensured the shoes stayed comfy during long hours of dancing — and thanks to their vibrant color schemes they were also the perfect way to make your presence felt. In a newly liberated Berlin, the Germans were taking to the ZX as the optimal festival shoe as well, sporting it to pulsating techno parties.

The “Summer of Love” made sure that the ZX line was stamped into the history books, and its second wave of cross-cultural pollination occurred in 2008 and 2009, when adidas presented the inaugural A-ZX line. Tapping 22 adidas Consortium partners as wide-ranging as colette, HUF and IRAK, A-ZX gave some of the world’s finest creative minds a chance to interpret the ZX story through their own lens. A-ZX was also divergent from the original “Summer of Love” releasesin another way: as footwear tech had advanced in leaps and bounds since the ‘80s, adidas presented ZX firmly as a lifestyle product, no longer a high-performance shoe adapted for lifestyle purposes. 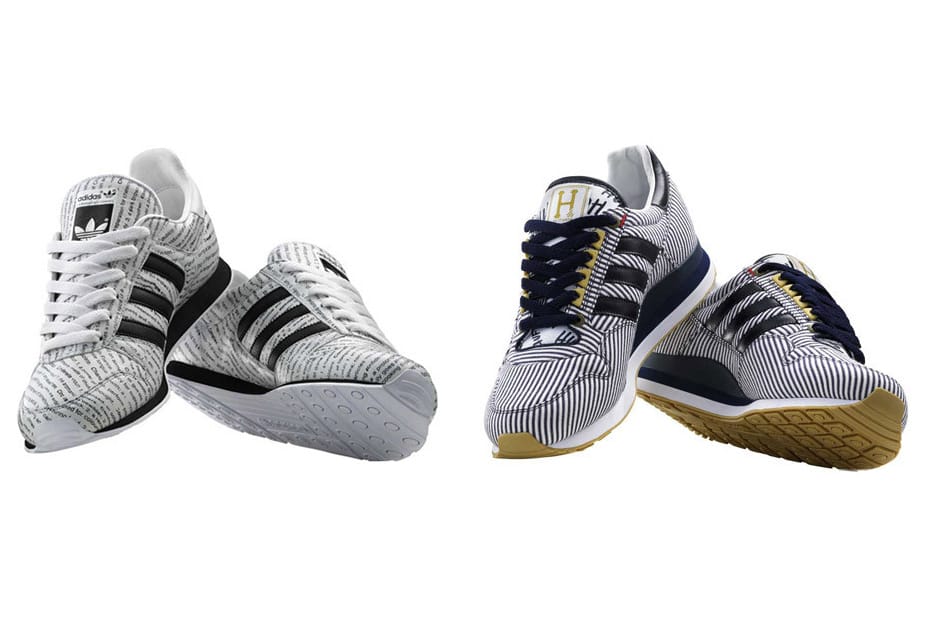 An open-minded, open-archived assemblage of shoes, the A-ZX line set a new standard of collaboration, both in size and scope. Up until then, co-crafted shoes were rare occurrences for adidas, and often had a story the purchaser would have to unravel on their own accord. The A-ZX line put these stories at the forefront, and magnified their reach by telling local tales on a global scale, like colette’s French elegance or HUF’s nod to San Francisco’s rich railroad history. If it wasn’t for A-ZX’s wide-reaching, open-minded slate of inspirations, would we have current-day standouts like Pharrell’s expansive Hu project or even Kanye West‘s adidas YEEZY line? It set the precedent for high-energy Three Stripes lifestyle in the 2010s and beyond.

As the aughts passed by, Torsion and ZX as a whole took a temporary backseat to other adidas innovations like BOOST, the adidas YEEZY line and Futurecraft technology, though ZX did have a moment with the ZX Flux. However, ZX has come back in a major way. 2019 marked the 35th anniversary of ZX and the introduction of the ZX 10.000 C, a shoe that brought original Torsion designer Jacques Chassaing out of retirement. 2020 is even more lively for ZX stans: adidas Originals has revived the A-ZX line for a second go-around, featuring 26 partners in total from LEGO to atmos.

“All the storytelling [in the ZX line] is so rich, and we want to treat it with the biggest respect.”

The market is different, the time is different and the products are different — but the eye towards innovation and storytelling remains unchanged. “All the storytelling [in the ZX line] is so rich, and we want to treat it with the biggest respect,” says Jagla. “Everything we do needs to be authentic and true to ourselves. We wanted to resonate with the collectors, the fanatics from back then — but with a few projects we wanted to explore new territories, to speak to someone who doesn’t know A-ZX yet.”

To do this, Jagla and adidas took an even more open mindset, considering both the expanded knowledge and access available to sneaker collectors in 2020. The game has changed since the first A-ZX line rolled out in 2008, so it was important for the Three Stripes to do the same. “Everything has become so much faster and more dynamic,” says Jagla. “There are so many more competitors, so much more product. Even the consumer knows more — they know everything about brand history, products, collaborative partners. Due to that transparency, we are challenged to come up with even more creative ideas and concepts.” 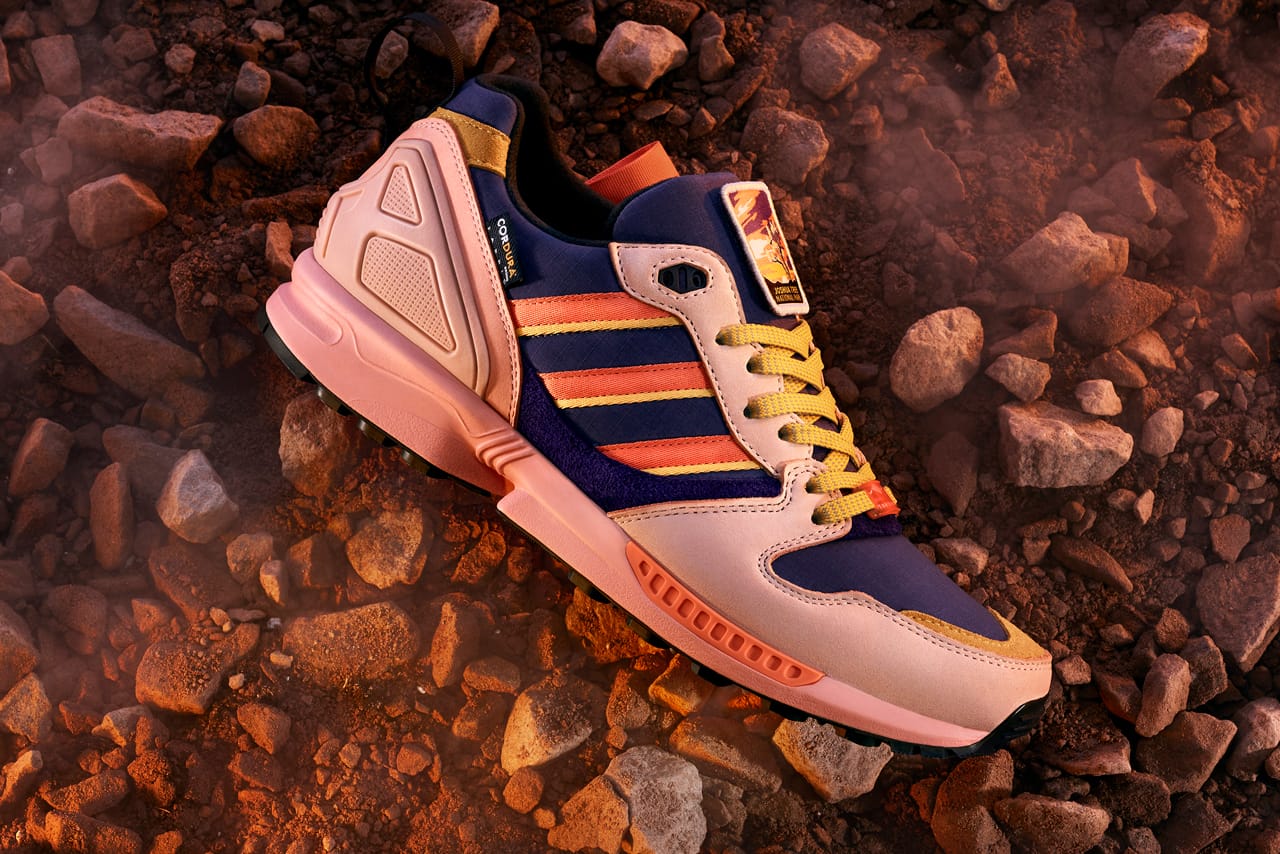 A prime example of an unexpected concept is a Joshua Tree-themed ZX 5000 created in collaboration with the National Parks Foundation, far from the first name you’d think of when discussing footwear collaborations. The ZX line’s richest roots are indeed in Germany and the U.K., but according to Jagla it was designers at the Trefoil’s North American headquarters in Portland who pushed for the national parks collaboration. “Atmos, Concepts, IRAK may speak to the fanatics more, but the ‘National Parks’ speaks to someone who’s younger, more conscious, more into sustainability and the outdoors.”

Although the ZX hasn’t exactly walked a linear line over its nearly four decades on the market, this inclusive nature of the latest A-ZX collaboration ties back into the line’s original purpose: to provide shoes for a wide variety of runners and athletes. Thirty years later, Torsion is still alive and well too, used on modern silhouettes like the UltraBOOST for unparalleled structure and flexibility.We’re seeing a “third wave” of ZX in 2020, one that was made possible by a strong cultural history, innovations in both technology and collaboration, and the current sneaker market where consumers demand a damn good story.

Due to the current climate, this “third wave” of ZX may be more on Instagram than at warehouse raves or techno partiesbut much like it has in the 12 years since the first A-ZX pack, the A-ZX line covers the entire street culture alphabet.
Source: Read Full Article