Father’s Day was a windfall for both dads and retailers.

After spending more than a year at home wearing sweatpants, men are in dire need of a refresh to their wardrobes as they get ready to head back to their offices this summer or after Labor Day. And so their significant others flooded stores and burned up their computers over the Father’s Day holiday to help them look fresh and modern when they finally return to their desks.

That was the consensus of retailers big and small whose cash registers were ringing over the past two weeks as consumers spent some of the dollars they’ve been saving during the pandemic on their dads. Although non-apparel items found their fans — an outdoor pizza oven was a big seller at Bloomingdale’s — it was summer classics such as swimwear along with elevated casualwear basics that will work as well at the office as on Zoom that truly set the tone.

The National Retail Federation had projected U.S. consumers would spend more than $20.1 billion on gifts and other items for Father’s Day this year, a record high. Last year, total spending was $17 billion, which was a record as well. And initial results suggest the projections were spot on.

“Overall, we were very pleased,” said Ken Ohashi, chief executive officer of Brooks Brothers. “Historically, Brooks Brothers has been a Father’s Day destination,” and this became evident over the past two weeks.

Not only did the more-formal side of the business benefit from the return of events and weddings, but the sportswear side was even more popular, he said. “That’s our largest category and is the fastest growing.”

Knitwear, sweaters, shorts and swimwear were among the standouts, and the new direction spearheaded by creative director Michael Bastian to “put the spokes back in the wheel” saw updated items in traditional fabrics such as seersucker, linen and madras “outperform the rest of the category.” 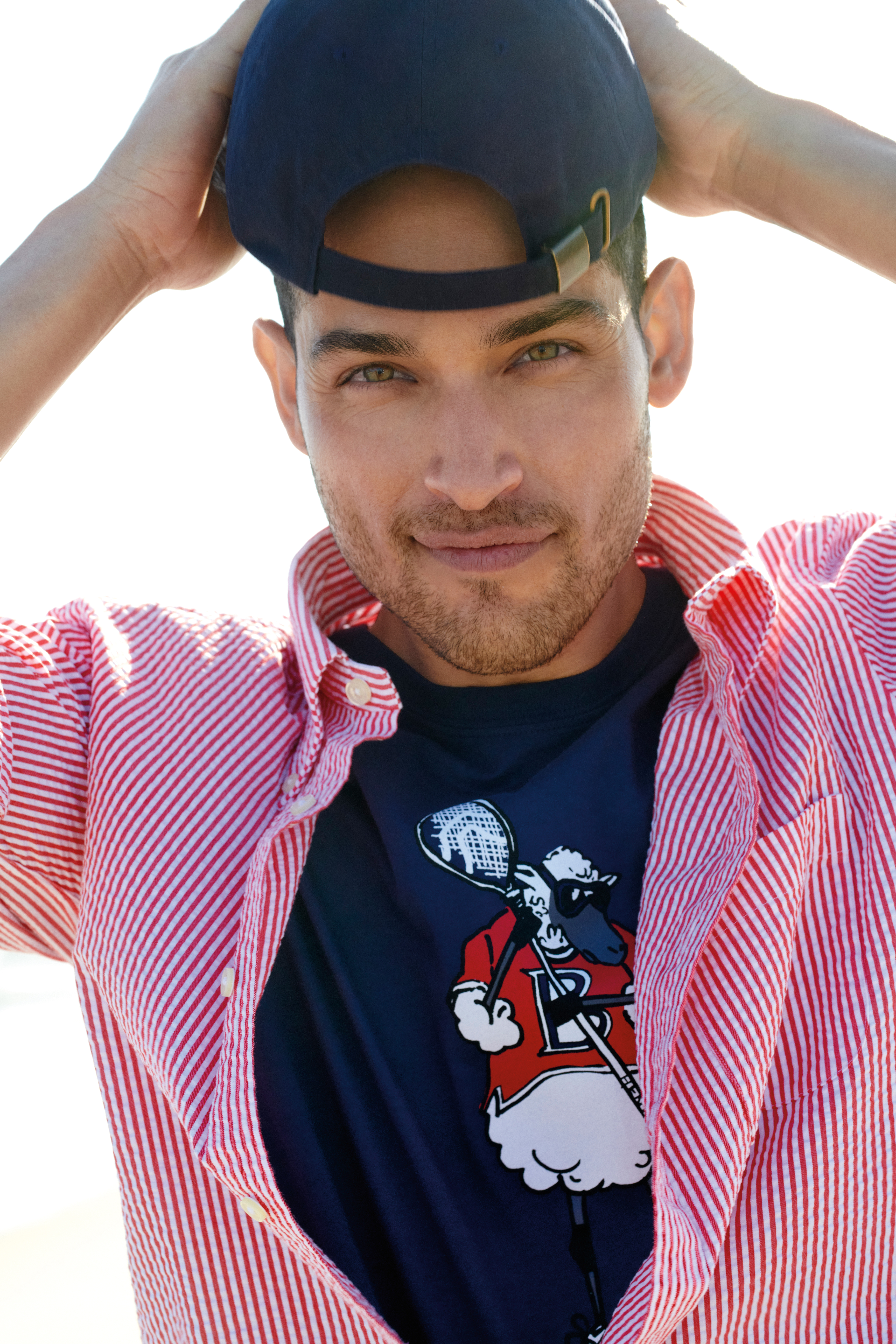 Ohashi said whimsical pieces such as a graphic T-shirt of store mascot Henry the sheep and his daughter for $49.50 was the bestselling T for Father’s Day. Also strong was the addition of “luxury elements” to the assortment such as elevated sweatshirts and sweatpants offered with monogramming, a popular add-on that now represents 25 percent of that category’s overall business.

Ohashi said sales were strong both online and in stores. “The web has continued to grow and is a larger percentage of our business, but our brick-and-mortar business has accelerated over the past few months,” he said.

As a result of the strong showing for Father’s Day, Ohashi said he feels “really good” about fall and holiday. Although suits and dress shirts will remain a mainstay of the business — especially as guys head back to the office — the focus will be on more lifestyle products. “That was our number-one strategy when we acquired Brooks Brothers,” he said. And as men are embracing more casual options to wear to the office, he believes the company is well-positioned to capitalize on the trend.

“Historically, people have come to us for wear-to-work clothes, but now they’re discovering our sportswear. And the rate of our new customer acquisition has been very high, which is an exciting indicator for us.”

Brooks Brothers is not alone in benefiting from the consumer returning to shopping. Macy’s also experienced strong business for both Father’s Day and Mother’s Day, according to Nata Dvir, chief merchandising officer.

“We’ve seen a lot of holiday business come back strong,” she said, noting that for Father’s Day, consumers started shopping earlier than usual this year, giving a boost to business for a two-week stretch prior to Sunday.

Among the most popular choices were luxury items as well as lifestyle products, Dvir said. That included fragrances from high-end brands, watches and jewelry, including a dad-daughter necklace that shows consumers were ready to “spoil their dads.” In addition, gifts for outdoor entertaining — grills, blenders, corksicles, the newly launched wine shop, and a cornhole-meets-golf game — were also strong sellers. This focus on gifts is a key strategy for Macy’s as it seeks to position itself as a gift destination, she said.

She said that it was encouraging to see these new categories perform for Father’s Day along with the old tried-and-true — a development that bodes well for the future.

On the apparel side, it was the usual suspects: polo shirts and shorts in a summery palette. Interestingly, the suit business is holding its own as consumers dress up for special occasions. “That’s such an important category for Macy’s,” she said. Fashion dress shirts are also performing well, along with wovens, which “means people are going back to the office.”

She said that sales didn’t just come from online but from the physical stores as well. “Our digital business continues to be good, but the stores are rebounding,” she said. In addition, the buy-online-pick-up-in-store option that was instituted during the pandemic has been popular. “We saw that always spikes around holidays,” she said, adding that the fragrance pickups were especially strong.

Louis DiGiacomo, senior vice president and general merchandise manager of men’s wear for Saks Fifth Avenue, characterized Father’s Day as “great — we saw dramatic growth in the stores and online. It was a fantastic week and month when comparing it to 2019.”

Sales were driven by ready-to-wear, shoes and accessories, most of it buy-now-wear-now. That included shorts and swimwear — “This has been the best swimwear season we’ve had in years,” he said. — along with polos, which outsold sport shirts. Top brands included luxury players such as Versace, Dior and McQueen as well as Polo, Saks Fifth Avenue Men’s Collection, Zegna and Brunello Cucinelli.

In terms of accessories, sunglasses and watches are popular along with sandals — everything from true sandals to pool slides — and sneakers, which “have not slowed down,” DiGiacomo said.

As a result, he said he’s feeling “bullish about fall and holiday. Tourism is returning to New York City and we’re seeing the traffic turn around week after week.”

“It was great, really successful,” said Justin Berkowitz, men’s fashion director for the department store. “People have gotten so casual that things that had historically been purchased as Father’s Day gifts were not as relevant. The customer really gravitated to more-emotional purchases this year.”

That included printed resort shirts and swimwear as well as pool slides and sandals from designer brands such as Gucci, he said. “People are buying bolder, patterned shirts because they’re going out more. So whether it was for Father’s Day or for self-purchases, the shift is happening quickly.”

One of the surprise stars was an outdoor gas-powered pizza oven from Ooni that bakes a pie in 60 seconds and retails for $349. “It was absolutely bananas,” he said. “It was a great summer gift.” 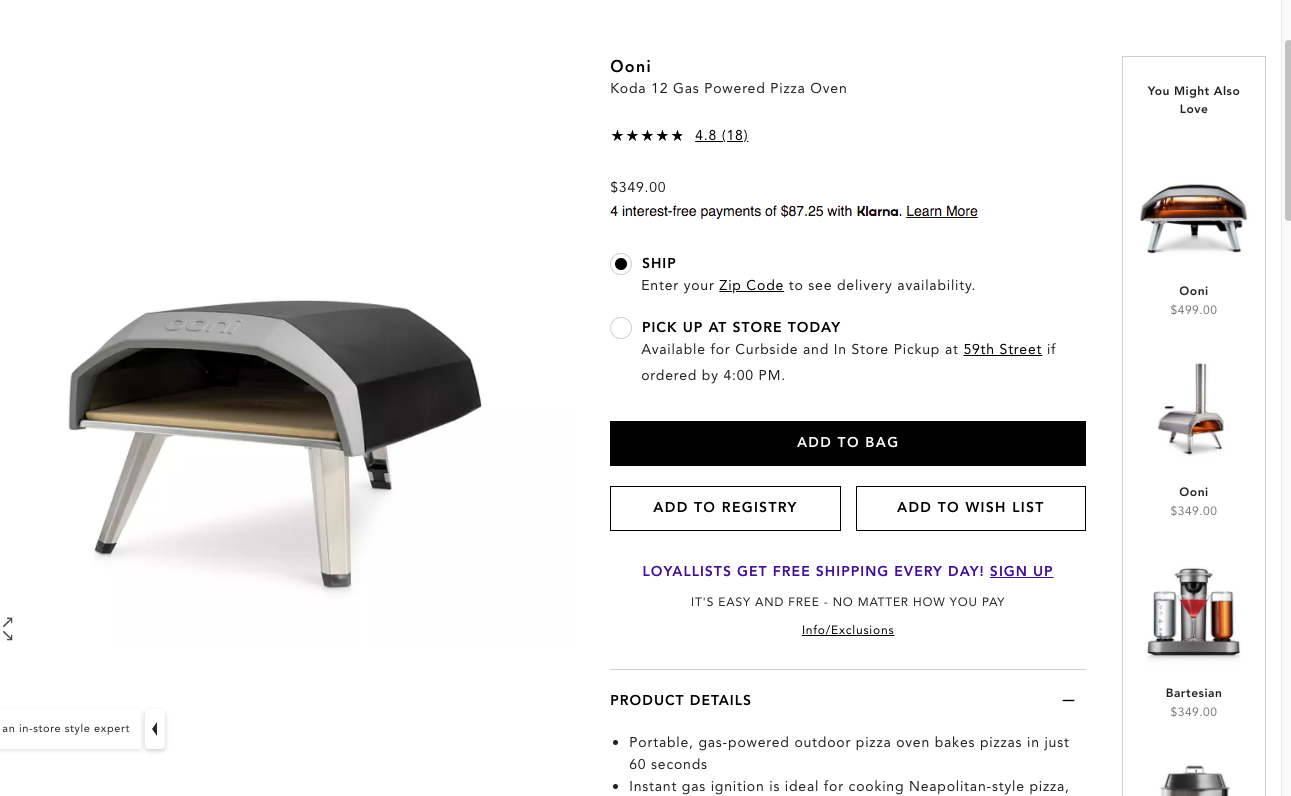 Bloomingdale’s found a lot of fans for its Ooni outdoor pizza oven.

He said Bloomingdale’s has always been “lifestyle-oriented,” he said, so in addition to polo shirts, the store offers an array of creative gift items such as grillwear, barware and other items for outdoor entertaining.

Last year during the height of the pandemic, Bloomingdale’s didn’t run a Father’s Day promotion but the store did put out a dedicated campaign this year as restrictions eased. And customers responded, both online and in stores.

“The shift is happening so fast. We haven’t seen the website lose its importance, but as people are vaccinated, they’ve been returning to the stores in a big way in the past six weeks.” As a result, Berkowitz said, “there is an optimism in the air. You can feel it on the streets and it’s bigger than just business.”

Bob Mitchell, co-chief executive officer of Mitchells Family of Stores, also reported that the company had “a very strong Father’s Day. We’re definitely closing in on 2019 levels across the board. All trends continue to point to everything getting better.”

Leading the way was sportswear, which he said was “up in the strong double digits.” Knitwear is “growing dramatically, wovens are coming back and bottoms are very strong, even dress pants. Sneakers are like a freight train and sport coats are better than 2019.” Among the most popular brands are Loro Piana, Cucinelli and Zegna on the luxe end and Faherty and Peter Millar on the more-moderate side. Dressy suits and tuxedos are also selling for special occasions such as weddings and parties.

But while Mitchell remains optimistic about the future, there’s still a question mark: “When people return to work in September, what will the dress code be?” he asked. Mitchells is banking on sport coats and outerwear to provide the growth outside of the traditional suit market, but that remains to be seen.

At Rothmans, president Ken Giddon reported that “Father’s Day was booming. People buying for their dads feel like they haven’t bought anything in 14 months, so there’s a lot of pent-up demand. Our stores were mobbed.” He said that although it may be only a “temporary phenomenon, it was fun and exhausting.”

Among the top sellers were Faherty, Mizzen + Main, Fair Harbor bathing suits and David Donahue shirts. “Those were the big ones,” Giddon said.

But like Bob Mitchell, he’s curious about what guys will be wearing when they go back to work. “They’re not going to be wearing suits, but they’re looking for something between dress slacks and jeans,” he said. And he’s thinking sales this fall and holiday will reflect their move to update their wardrobes to this new normal.

“I think it’s going to be a real strong fall, but it’ll be different. Most men are excited to be going back to the office since they’ve had a lot of home time and they’re looking forward to the getting back to the benefits of teamwork,” he said. “But they’ll be wearing something between dress-up and casual.”