The Duchess of Cornwall, 72, has been spending the lockdown with husband Prince Charles, 71, at their country home in Scotland. However, the royal couple recently returned to London in order to resume face-to-face engagements once again as the lockdown measures were eased in the UK. The Duke and Duchess had previously only taken part in public appearances through video calls, much like the other members of the Royal Family.

On Thursday the pair were pictured welcoming French president Emmanuel Macron to the UK.

However, it was her accessories that really did the talking in the stylish outfit.

Camilla paired the dress with her favourite Chanel heels  – a French brand – for the occasion, in a cream and black style. 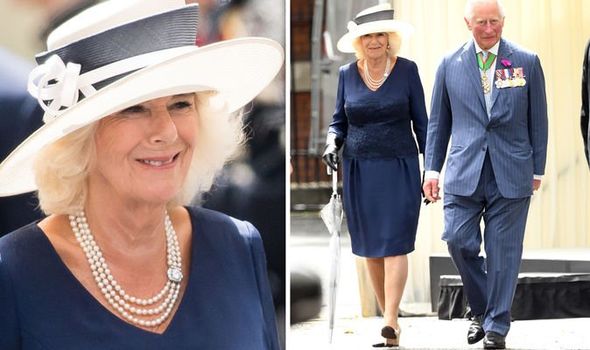 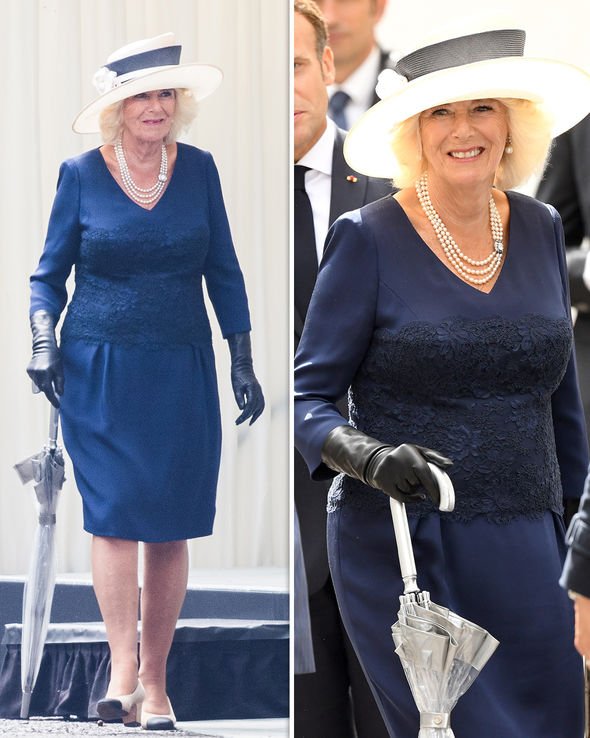 The classic heels feature Chanel’s signature colour scheme, with black toes, a low block heel and a cream design, and cost around £700.

The Duchess wore a special three-stranded pearl necklace for the royal event, which was from the Queen Mother’s collection.

Camilla has been spotted in the special pearl necklace before, which features an art deco diamond clasp.

The cleverly chosen accessories may have been a touching nod to their special visitor, who was in the country to commemorate the 80th anniversary of his predecessor Charles de Gaulle’s “Appel” – a BBC broadcast to occupied France after the Nazi invasion in 1940; a year when the late Queen Mother was still on the throne.

Camilla was also dressed for the unpredictable British weather, with a large clear umbrella to hand, black leather gloves and a large white hat.

Clarence House shared the pictures from the meeting on Instagram, posting: “The Prince of Wales and The Duchess of Cornwall today joined The President of the French Republic @emmanuelmacron to celebrate the 80th anniversary of General de Gaulle’s ‘Appel’ to the French population to resist the German occupation of France during WWII in 1940.

“On 18 June 1940, General Charles de Gaulle gave his speech from the BBC Broadcasting House in London to France as the French government prepared to sign an armistice with the Nazi invaders. The message offered hope in a time of despair and is today considered the founding text of the French Resistance.

“Today, Their Royal Highnesses received The President at Clarence House, before a wreath laying at the King George VI and Queen Elizabeth Memorial. 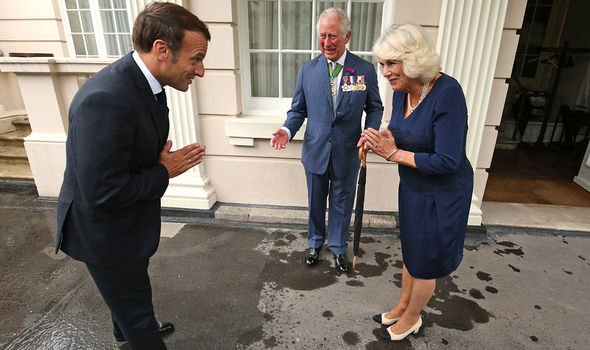 “London has been presented with the Légion d’Honneur – France’s highest distinction – for services in World War 2. The city provided a base for Charles de Gaulle, when he was exiled there during the war.”

Prince Charles accepted the award, saying: “It gives me the utmost pleasure and pride to accept the Légion d’honneur on behalf of this city and this country, and on behalf of all those who struggled for liberty in common cause with France.”

It’s the second time Prince Charles and Camilla have been out since returning to London. 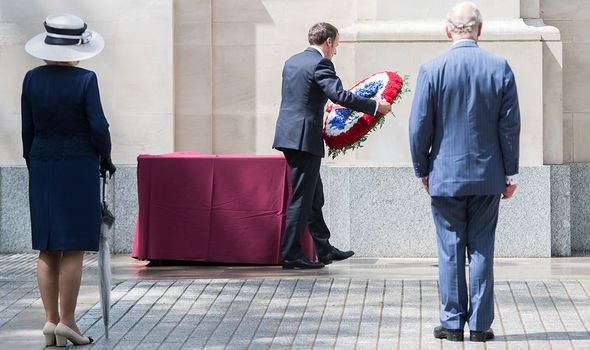 The royals also visited a hospital to thank key workers for all their hard work during the pandemic.

Camilla wore a much more casual look for the event, looking trendy in a Meghan Markle-inspired denim dress.

The midi dress featured long sleeves and a zip to the front, and she paired it with low nude heels.

The Duchess also wore a golden heart-shaped brooch with a crown design, as she spoke to nurses about their work and thanked them for the remarkable job they were doing.