A BOSS has been hailed a 'legend' for standing by his employee after a 'keyboard warrior' tried to get her fired for calling him a 'w***er'.

Viking Beard Company tweeted on January 4 apologising to their EU customers that Brexit meant they'd no longer be able to ship retail orders due to paperwork and custom costs. 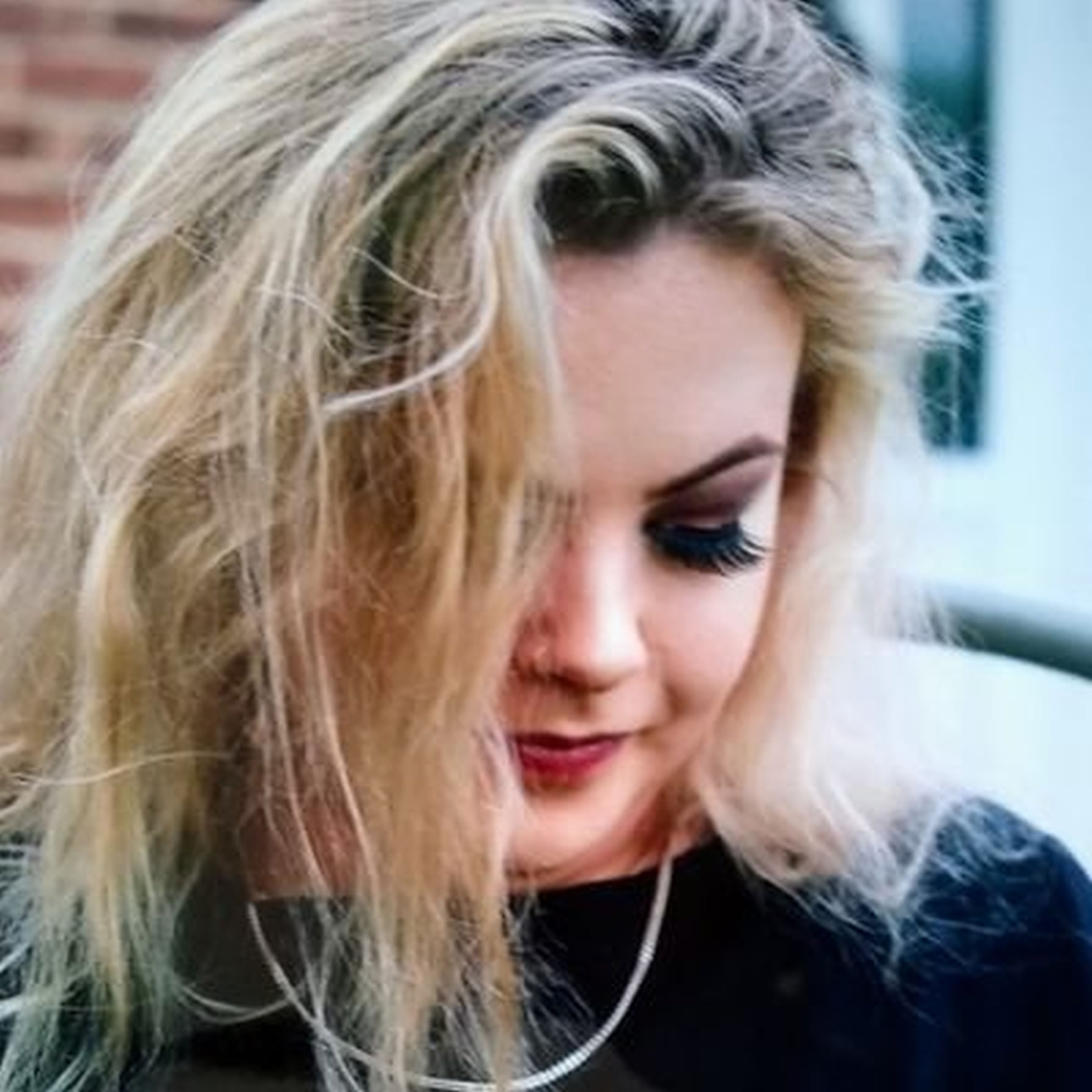 A 'bully' Twitter user responded declaring that if the beard care product company can't overcome initial challenges and 'fill out some paperwork' then they don't 'deserve his custom'.

But when Viking employee Sarah called him out as a 'f***ing w***er' and claimed that jobs are at risk due to Brexit she received a 12 hour Twitter ban.

Sarah then claimed that the individual 'bombarded' her boss with four emails in the space of an hour demanding her to be fired or they'll take 'legal action'.

However her boss Simon, believed to be sales and marketing director Simon Hildreth, appeared to hit back in an email that told him to 'put on your big girl pants and grow up'.

Simon called the angry emailer's bluff and told him to 'please try to sue Sarah' as they would pay for her legal representation and counter sue him – before branding him 'nasty'.

The email told the troll that he had 'no leg to stand on' as Sarah has 'nothing to hide' and that the company stood by her, as they 'would not stand for a member of staff being threatened'.

Sarah said: "It's a shame more bosses are not as supportive of their staff. We realise how lucky we are that our bosses love us like family."

Sarah shared her boss' response, which quickly went viral with more than 34,000 likes and retweets.

Her tweet which allegedly shared a screenshot of her boss Simon's 'amazing' response has been celebrated on Twitter and amassed more than 34,000 retweets, comments and likes.

Sarah's tweet read: "Someone's emailed my boss to try get me fired. They're threatening legal action cos I hurt his feelings. My boss responded with this email. My boss has my back."

She then wrote: "[He] bombarded my boss with FOUR emails in the space of an hour demanding I be fired or he'll sue! 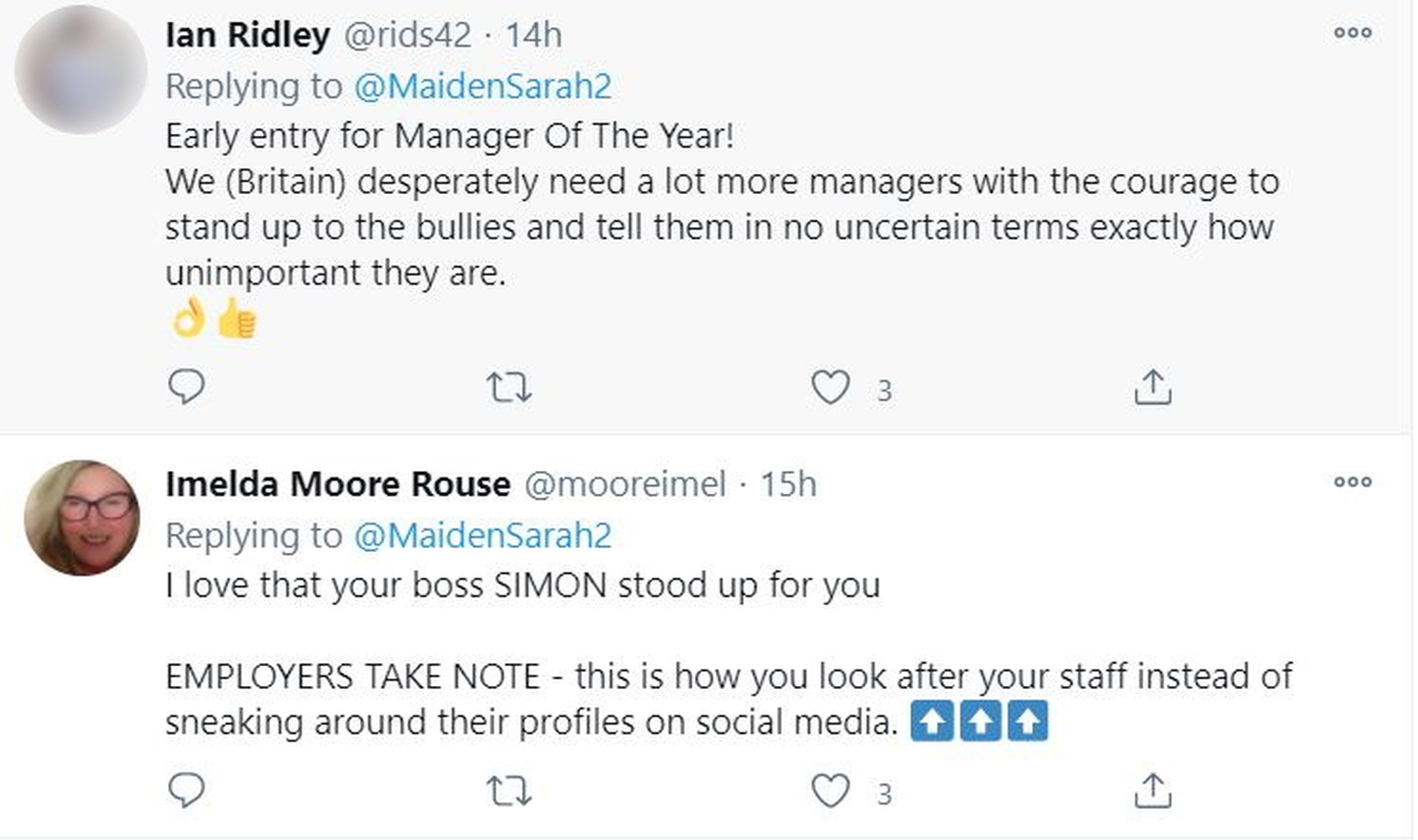 "He's the one who earned our beloved [Sarah] a 12hr ban after she handed him his a*se on a plate yesterday. Don't mess with Vikings!"

Delia Pallett-Smith: "I didn't think I could admire your bosses any more than I already do, but I was wrong – now I bloody LOVE them! Well done Simon."

Jane added: "Wow. Your boss is a superstar. Great response."

Paul tweeted: "Simon rocks. I love his way of dealing with thick bullies, and wish we'd all been that firm with them five years ago." 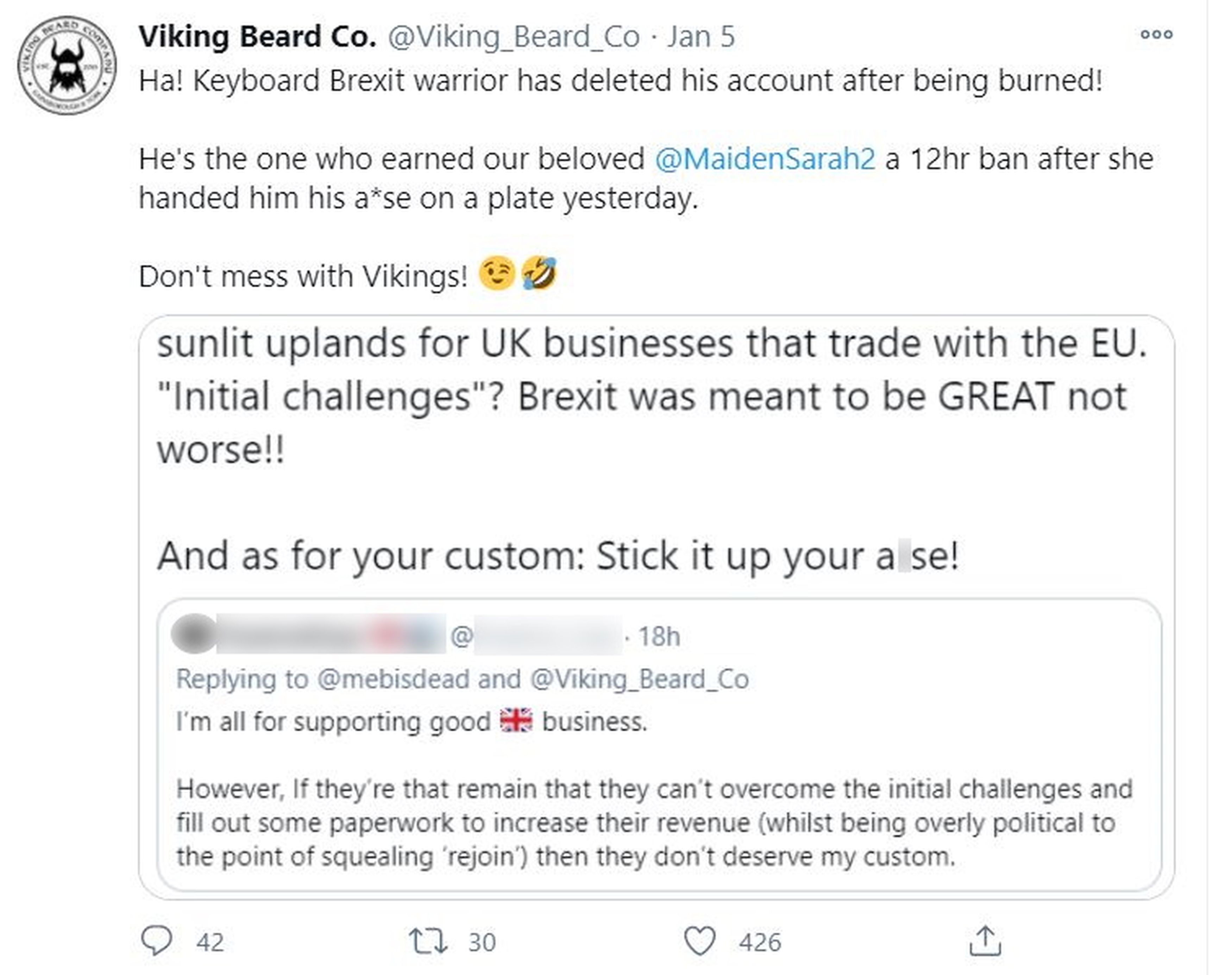 Vicki commented: "Simon the legend! If only all bosses were like that. I guess maybe some depends on the industry you're in.

"Whether being 'woke' is intrinsic to the business model. Employers should always as a matter of course defend their employees until give cause not to. Good to see this happen."

DrewLawrenceAntiques added: "I don't know if your boss is on Twitter but I'm pretty sure he become the most loved boss on Twitter after that response! How cool!"

Rocket the Raccoon also said "Now THAT is a boss."

However not everyone was as supportive of Simon's response.

David Gadsby wrote: "He backs you clearly so [clap emoji], but it’s not really a very professional letter in reply is it.

"Don't stoop to the same level, the content that has been written in reply could and should have been articulated a lot better."

Neil added: "Not that it would get much traction on Twitter but clearly the best course of action would simply be not to reply / engage. I mean this is ok but a bit childish."

In other news, this would-be intern was outraged after a company publicly shamed her "unprofessional" bikini snaps.

Plus we told you how this company was slammed as "disgusting" for offering women extra money to wear short skirts to the office to cheer up male workers.