Billie Eilish sent a stern warning to fans about hair dye and the damages it can cause to your precious locks. The singer spoke from experience after one fan asked about a time when her hair was ‘the most f–ked up.’

Billie Eilish got real with her fans while participating in the “post a photo of” Instagram Story challenge on December 29. The Grammy-winner, 19, revealed the story behind her signature mullet haircut — a look that wasn’t planned. When a fan asked Billie to share a photo of “The most f–ked your hair’s been,” the “Bad Guy” singer provided photo and video evidence of her past haircut gone wrong.

In the video, Billie can be seen pulling short strands of hair from the top layer of her hair, near her scalp. She appeared confused by the hair mishap, which was a completely fair reaction. Billie captioned the clip with a tip to fans who may be thinking about dying their own hair: “don’t trust just anyone who says they’re good with color [sic] my hair continued to (f)all out in chunks for the next two months after this.”

Billie’s hair breakage, which resulted in a mullet haircut, occurred sometime late last year. While she didn’t disclose the latter, the singer shared a red carpet photo (seen below) of her botched hair do’ at the LACMA Art + Film Gala in Los Angeles on November 4, 2019 — and, she still looked amazing! At the time, Billie was honest with a reporters about what had happened to her hair. 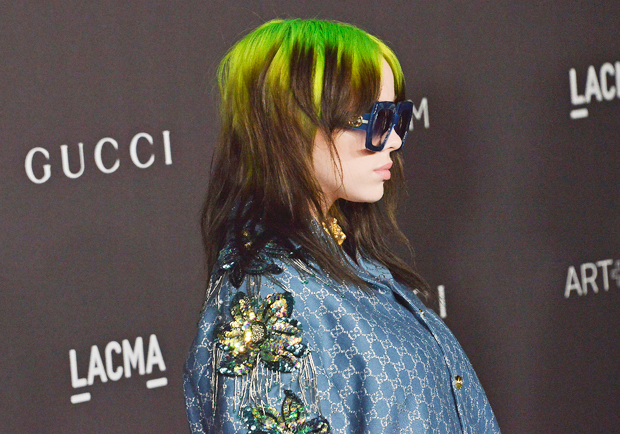 “Mullet? What do you mean mullet? You know what happened? Somebody dyed my hair and they burned half of it off,” she told TMZ at the time, explaining, “It’s not on purpose though. I’m growing that sh-t out.” Despite Billie’s hairstyle being an accident, she unknowingly carried on the age-old hairstyle and inspired a whole new generation of fans to do the same.