Like other single guys his age, Mack Knight, 40, a software company executive in Los Angeles, has a crew of buddies who like to explore the city, travel and workout together.

They take their exercise seriously: Each wear a fitness tracker called Whoop that monitors their body’s vital signs (including heart rate, breathing and sleep), and makes that data shareable through an app.

The other week Mr. Knight was reviewing his Whoop statistics when he noticed that one of his buddies, a friend from business school, was missing his daily workouts. “That was very unlike him,” he said. “He works out religiously.” So the next time they hung out, he asked whether his buddy was O.K.

The ability to share intimate stats among friends has turned this fitness app into a de facto virtual men’s support group. People are using it to keep tabs on each other’s physical and mental health, and to lend a helping hand if a buddy appears to be in trouble. (Turns out, Mr. Knight’s friend was fine — just engrossed in a cryptocurrency project.)

Whoop was created in 2012 as a high-end monitoring device for professional athletes. Worn on the wrist or arm, it collects health data that can be shared with coaches and personal trainers to improve workouts. 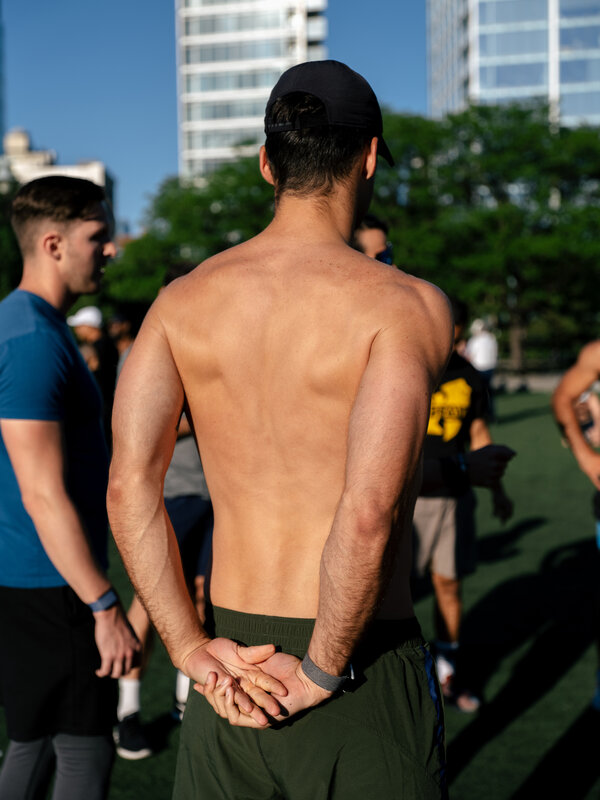 “I was a college athlete,” said Will Ahmed, the app’s founder. “I thought it would be valuable to create something where we could see each other’s data as a team and see how we were evolving.”

The data is highly personal, even intrusive. It shows if your heart rate spikes randomly or if you only burn 300 calories one day instead of 1,000.

Whoop users can choose to keep their information private, but since the device became available to the public a few years ago (users pay $30 a month, which includes the band), unanticipated uses have emerged among friend groups. The app is for anyone but it has found a use case that serves men in more way than one.

“Whoop has found a sneaky way to help men feel comfortable sharing stuff with each other without hitting them over the head and saying you have to share your feelings all the time,” said Dr. Jelena Kecmanovic, a clinical psychologist in the Washington D.C. area who often writes about how technology impacts lives.

The fact that data is shared “prompts men to ask, ‘You didn’t sleep last night, what is going on?’” Dr. Kecmanovic said. “It’s a clever way to get people to check in, support each other, praise each other, and feel like they are part of a group.”

Peer pressure is a side effect. “We can all see each other’s numbers, so I want mine to be good,” said Joe Wernig, 30, a senior product manager for NBC Sports, who lives in the East Village. He joined Whoop in January after a friend convinced him. He is now part of four groups, each with two to six people. “There is a friendly competition,” he said.

During Memorial Day weekend, for example, Mr. Wernig was partying with friends at an Airbnb rental in Cape May, N.J., when he checked the app just before midnight. He saw that all his friends had exercised more than him that day, so even though he was inebriated and it was raining, he went for a short run along the beach.

“You can see how often your friends run or lift weights,” he said. “I can learn lessons from them that I apply to my own life.”

Friends are also using the app to spy on one another. “My friends make fun of me all the time,” said Anthony Martinez, 30, a finance director at Vox News who lives in the West Village. “If I am dancing and my heart rate spikes someone will say, what were you doing last night at 2 a.m.?”

The app’s off-label use as a social support group became more pronounced during the darker stretches of the pandemic.

“A lot of people don’t want to talk about the things that are challenging us,” said Lee Chadowitz, 31, a product manager in Hong Kong, who is on a team with his trainer and eight friends. “I can see if my buddy is only sleeping three hours a night, and then I probably have a duty to check in. I don’t even have to say anything direct. I might just do a little nudge of, ‘Hey, want to get a beer?’”

According to Whoop, the app has about 85,000 teams (or groups of friends who have created a sharing network on the app). “The majority of our teams are in the 10-person range,” said Mr. Ahmed, who would not disclose the total number of users.

“There are a lot of groups popping up to get men to support other men, but the big problem they are having is that men are not conditioned to meet with other men and talk about their feelings,” Mr. Reichenbach said. He points to groups like Mr. Perfect, which started in Australia in 2016 and brings men together under the pretense of having a barbecue.

“Men have fewer opportunities to form communities where they check in with each other and praise each other and support each other,” Dr. Kecmanovic added. “We see a lot with male clients, especially after they leave high school and college, that struggle with isolation. The pandemic has only made that worse.”