Vicky Guo and Patrick Roath were not playing games. From an animated first-date debate on charter schools after the 2016 presidential election, to discussing long distance after three months of dating, the couple were clear about their intentions from the start.

“She’s really thoughtful and direct about her feelings,” Mr. Roath said, citing one of the attributes he loves most about Ms. Guo.

Ms. Guo, 32, the director of ventures, strategic investments and partnerships at Pearson Education in Boston, and Mr. Roath, 34, a lawyer at the law firm Ropes & Gray in Boston, first connected in January 2017 via the dating app the League. They met for drinks at a local hotel bar and were immediately intrigued by the other’s passion for issues in the political and education spheres.

Though Ms. Guo was planning a July 2017 move to New York from Boston, where the pair were living and working at the time, the couple continued to see one another.

Deeper feelings developed quickly, but Mr. Roath had no idea of Ms. Guo’s plans to relocate until that April, when one of Ms. Guo’s friends asked her about the move in front of him.

“Yeah, that kind of forced the conversation,” Ms. Guo said, laughing. The two decided to continue the relationship long distance. So began what Mr. Roath described as “a two-year Amtrak romance along the NE Corridor.”

When Ms. Guo moved back to Boston in 2019 to be with Mr. Roath, marriage was at the top of both their minds.

Ms. Guo suggested the pair ask each other the “13 Questions to Ask Before Getting Married,” that were listed in a 2016 New York Times article by Eleanor Stanford. 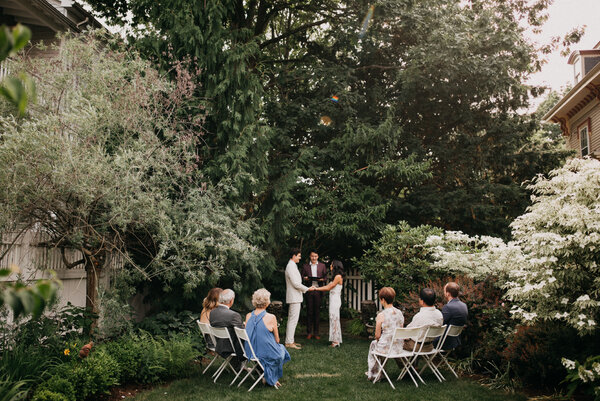 “I sort of thought of it as a joke but she took it very seriously,” Mr. Roath said.

“They’re good questions,” Ms. Guo countered. “They’re very practical and I would say I’m a very practical person. It let us think about how to organize our lives so that we can move forward.”

The couple discussed the questions listed over the course of several days. “At the end of that I was like ‘OK, so now we can get engaged!’” Mr. Roath said.

For the proposal, Mr. Roath told Ms. Guo that Ms. Stanford was coming out with a book called “The 14th Question,” and that the author was doing a special “book talk” event in Boston in March 2020, to which he had reserved tickets.

“I had these doctored emails that were purporting to come from The Times and all these things suggesting that this was a real book talk,” Mr. Roath said. The “book talk” was to take place at the hotel bar where the couple had first met, with the 14th question being, of course, “Will you marry me?”

But the pandemic foiled Mr. Roath’s plans as everything shut down that week. He proposed a month later on the banks of the Charles River instead.

Originally the couple planned for a June 2021 wedding on Thompson Island in Boston Harbor, but because of the coronavirus, they decided to push the date to June 18, 2022 and hold a small ceremony in their backyard in the interim.

Together they spruced up and designed their new home’s garden, where they were wed, on June 19 in front of seven guests, by Ms. Guo’s longtime friend, Alan Chiu, who received a one-day license from the Commonwealth of Massachusetts to perform the ceremony.

“We’ve talked about getting a dog,” Mr. Roath said, adding, “at some point we’ll go on our honeymoon.” The couple is most excited about navigating the world together now that they are married.

“Lots of things will change in the future, but it’ll be nice to be a unit,” he said.